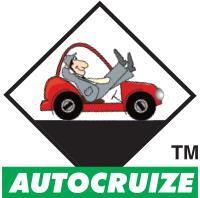 Cruise control (sometimes known as speed control or autocruise, or tempomat in some countries) is a system that automatically controls the speed of a motor vehicle. The system is a servomechanism that takes over the throttle of the car to maintain a steady speed as set by the driver.

The cruise control takes its speed signal from a rotating driveshaft, speedometer cable, wheel speed sensor from the engine’s RPM, or from internal speed pulses produced electronically by the vehicle. Most systems do not allow the use of the cruise control below a certain speed – typically around 25 mph (40 km/h). The vehicle will maintain the desired speed by pulling the throttle cable with a solenoid, a vacuum driven servomechanism, or by using the electronic systems built into the vehicle (fully electronic) if it uses a ‘drive-by-wire’ system.

AUTO-mate’s AUTOCRUIZE systems are capable of being turned off both explicitly and automatically when the driver depresses the brake, and also the clutch. Cruise control often includes a memory feature to resume the set speed after braking, and a coast feature to reduce the set speed without braking. When the cruise control is engaged, the throttle can still be used to accelerate the car, but once the pedal is released the car will then slow down until it reaches the previously set speed.